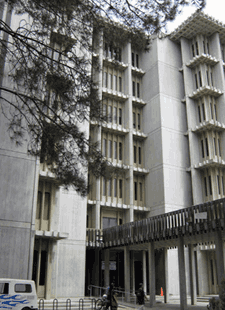 The history of UCSD as an outgrowth of the Scripps Institution of Oceanography is documented in the book An Improbable Venture, but there is little to be found there about the Mathematics Department.

The campus was first conceived in the late 1950s as a graduate and research Institute of Technology and Engineering. The new school was to provide instruction and research in mathematics, physics, chemistry, the earth and biological sciences, and engineering. The first faculty appointment was made in July 1957. The original plans were soon expanded into a more general campus under the leadership of Roger Revelle, director of the Scripps Institution of Oceanography; and in 1959, the UC Regents approved the University of California, La Jolla. A year later, the campus was renamed the University of California, San Diego and its first graduate students were enrolled.

The graduate program in 1964-65 provided basic full-year courses in real and complex analysis, modern algebra and topology, a year course on Methods of Applied Mathematics, and one on Numerical Analysis. In addition, seminars on algebra, topology, and functional analysis were conducted for advanced students. A weekly colloquium was held and frequent special lectures by visiting lecturers, especially in connection with recruitment of additional faculty, were given.

The Mathematics Department began the year 1965-66 with a considerably expanded staff of 12 regular and five visiting (or acting) members of all professorial ranks. All senior members of the Mathematics Department had federal research grants. The graduate program was expanded by additional courses in partial differential equations, functional analysis, and probability. A program providing for the undergraduate major in mathematics and service courses to other fields was offered.

In the following lists, years run from July 1 to June 30. An appointment listed during a year means that the appointment became effective during that year, normally July 1, and a departure listed during a year means that the person left at some time during the year, normally June 30. The list of teaching visitors is somewhat suspect, as the records are difficult to trace in many cases.